Execution capacity: the value of the private sector

The Mexican President has tied Pemex to the success of his government on the issue of hydrocarbons. It does not bet on the contribution of the private sector, currently represented by more than 70 companies that have more than 100 Production Sharing Contracts PSC and licenses. He has repeated on several occasions that the contribution of private companies is not significant, and he does not see a compromise in the effort they have made from 2015 to the present, where they have only increased by about 40 mbpd.

Since 2015, companies with PSC contracts, have invested more than 2.7 billion dollars in the activities carried out, based on plans approved by the National Hydrocarbons Commission, CNH. Most of this investment is related to activities necessaries for the definition of “plays” that allow them to locate exploratory wells, as well as workover technical programs in case of those mature production fields contracts, assigned in the 1,3 bidding round.

It seems that the experts from SENER and the CNH have not explained yet to the President and the Energy Secretary that most of the contracts awarded in the first two rounds in 2015 are for exploratory blocks, and that there are processes of seismic information collection, interpretation of this information, definition of the oil systems associated with geological structures, selection of plays and drilling of wells that may take several years, since both activities, seismic information collection, as well as drilling of wells, require some time, first to design the  engineering phase, and then, hiring other technical service companies, to carry out the specialized activities.

Only 29 of the PSC contracts and two farm out contracts – Pemex’s partnerships with two international private companies – are contributing with production, because these fields had active wells that were producing at the time of the activities transfer. Once private companies took responsibility for the fields, they carried out the engineering necessary to reactivate or repair inactive wells, a much faster process than carrying out activities to drill new wells. So the production received from Pemex of about 10 mbpd in those fields, has been increased to 47 mbpd with the effort contributed by private companies. 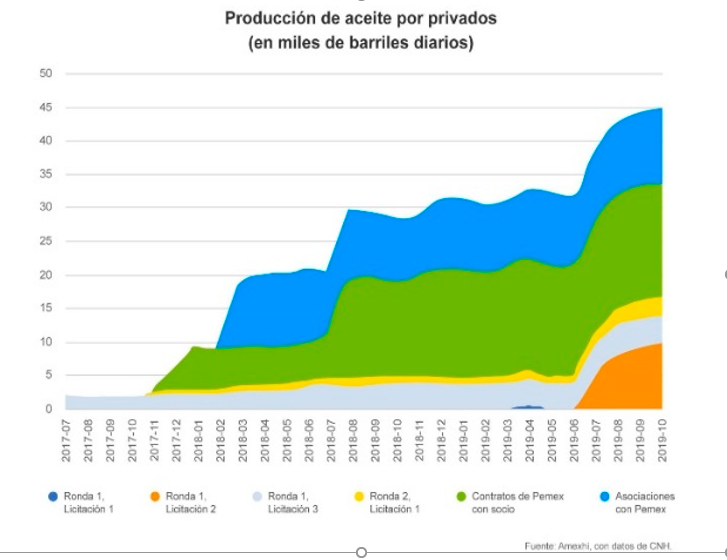 In any case, it is a modest volume but higher than that received from Pemex at the time of taking possession of the fields. The government’s argument is that activities carried out by private companies have been too slow, forcing the President to demand a volumetric commitment in his first meeting with the representatives of AMEXHI, the organization created by private companies to act as an association, before the public institutions and the political sector of the country. On that occasion, AMEXHI committed with the government a production of the order of 280 mbpd for the year 2024, that is, at the end of the six-year term of this government administration.

Beyond the barrels produced, AMEXHI highlights the financial contribution the private companies has made to the State. Since 2015 and until the end of 2019 has exceeded the 1900 million dollars deposited in the Mexican Petroleum Fund, and more than 1600 million contributed to Pemex with the participation of companies in farm outs and migrations from three fields of CIEP contracts to PSC. The government take expected of each project including royalties, taxes and benefits of production volumes, exceeds 70%, a figure that is within international parameters, for this type of process.

This constant discussion between government representatives and AMEXHI also directly involves Pemex,, The NOC has two fields in association with two international companies – farm outs – ,  three PSC contracts resulting from the migration of the CIEPs, and several associations with other companies as consortiums that are developing exploration activities, and that have been severely criticized for not contributing production. So, Pemex has an important responsibility to inform the government about the realities that they face every day within these consortiums, and that they must overcome to meet the goals in each of the projects.

Pemex also now faces a new type of association that was not budgeted. A reservoir unitization process. The Zama discovery in an exploratory block, from the second round of 2015, awarded to the consortium of companies Sierra Oil and Talos Energy. A discovery made in shallow waters of the Gulf of Mexico – and with a potential for reserves of over 1 billion barrels. During the geophysical interpretations and definition of the geological petroleum system, Talos Energy discovered that the accumulation extended to a block or zone assigned to Pemex, and therefore it had to inform the national company to initiate a process of analysis for the unitization of the reservoir, and to be able to define the size of the accumulation and the responsibility for the operation of the project.

Therefore, Pemex must drill a well that allows the evaluation of the potential reserves existing in the section of the deposit that is in its block, something similar to what was done by Talos Energy. However, Pemex has not yet drilled this well, and the Talos discovery is over a year old. Obviously, this situation is causing tension between the Talos Energy, , Pemex and the Mexican State,. Talos have to suspend its operations, waiting for Pemex’s definition and response.

The government must understand that, even strengthening Pemex, the country needs a greater capacity for execution and this can be provided by private companies. SENER and CNH must put this discussion on the table and inform the President of the progress made by the private sector, since the disqualifications do nothing to strengthen the sector, but they do violate its purpose of achieving a production of 2.4 mbpd at the end of its six-year term.